Ten thoughts on the Cowboys 31-6 win over the Dolphins 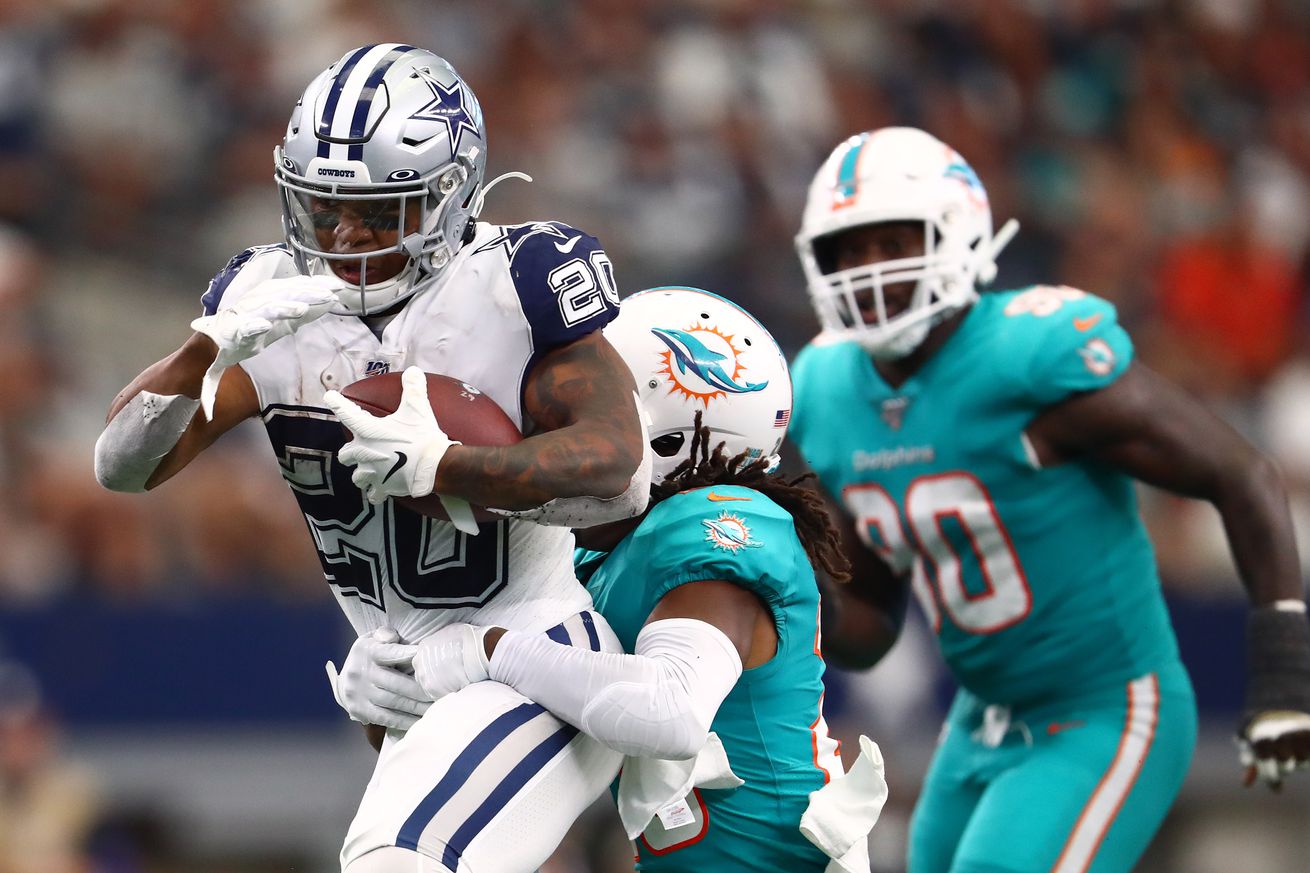 What stood out to you in the Cowboys victory over the Phins?

The Dallas Cowboys did what everyone expected them to - they beat a terrible Miami Dolphins team. It wasn’t pretty early on, but once the team got going, they were able to impose their will on a struggling Dolphins team. The Cowboys are now 3-0, sitting comfortable in the NFC East, and will travel to New Orleans to face the Saints on Sunday night. The season is off to a good start but before we look ahead to next week, here are ten thoughts on their win against the Dolphins.

1. The AT&T curse for Allen Hurns

The last time we saw Allen Hurns at AT&T Stadium, Jason Garrett was holding his hand after a gruesome ankle injury ended his season in the playoff game against the Seattle Seahawks. Hurns never played another game for the Cowboys as he was released prior to training camp beginning.

The veteran receiver was able to land on his feet and sign a one-year deal with the Dolphins. Hurns stepped back onto AT&T Stadium on Sunday to square off against his former team, only his time was short lived as he exited the game early in the first quarter with a concussion.

If Allen Hurns never has to play in AT&T Stadium again, it will be too soon. pic.twitter.com/Ekg87EJnt5

2. Witten, the yards after catch playmaker!

How can you not love how the Cowboys are using Jason Witten this season? It’s everything we’ve hoped for. He’s not getting an excessive amount of targets where Dak Prescott is just forcing it into him. Instead, he’s just a safety valve for his young quarterback. Witten’s efficiency has been great as the team has used him well in goal line situations. While he didn’t gain any ground on Dez Bryant’s franchise touchdown reception record, he did haul in three catches for 54 yard yards. And a couple of them were fun to watch.

On a scramble drill, Witten recognized the defender had to go after Prescott, allowing Witt to sneak behind him to convert a third-and-20 play. On another play, Witten stiff armed the defender, enabling him to get just enough yards needed for a first down.

I've been saying this for years about Witten - if you just get the ball in his hands and get him loose in space, good things will happen.

And by years, I mean never. I've never actually said that. pic.twitter.com/GyXYNunmUy

Finally, the dynamic duo we’ve been waiting for. Ever since the Cowboys drafted Tony Pollard, we’ve been excited about what he could add to the offense. Against the Dolphins, we got a great taste. Both Ezekiel Elliott (19 carries for 125 yards, 6.6 ypc) and Pollard (13 carries for 103 yards, 7.9 ypc, 1 TD) rushed for over 100 yards. It was the first time the Cowboys have had two 100-yard rushers in one game since 1998 when Emmitt Smith (122 yards) and Chris Warren (104 yards) both did it in a 31-10 victory over the Redskins. Oddly enough, Jason Garrett was the team’s starting quarterback in that game.

It was great to see the offense just chew up the clock without having to wear down Zeke. The rookie did a great job waiting for plays to develop and hit the hole quickly once they did. Pollard averaged a remarkable 9.2 yards from scrimmage at Memphis so seeing this type of efficiency from him in this offense shouldn’t be all that surprising.

Starting 3-0 against this level of competition isn’t all that impressive, but the manner in which they are doing it, is. For the third straight game the Cowboys have put up over 400 yards of offense and have scored over 30 points.

Just as a frame of reference, the Cowboys only had three games last season where they scored over 30 points. I’m guessing they’ll probably beat that mark this season.

It’s hard to conjure a reason for how unlucky the Cowboys are when it comes to getting takeaways. Defensive backs are having passes roll off their fingers. Deflected balls always seem to land in an area where there is no Cowboys defender around. And when a corner does come down with a nice pick, he lands out of bounds. Even muffed punts are fumbled around to where the ball drifts away out of play. It’s just infuriating that the Cowboys are always coming up short with these takeaways.

The defense is playing okay. They’re definitely not allowing many points. The defense is averaging just 14.7 points a game, which if they somehow maintained would most likely be tops in the league. Sure, they’ve played some poor offenses, so there’s that. But what’s most aggravating about the defense is their inability to take the ball away. The law of averages suggest their luck will change soon, but we’ve been waiting for that train to arrive for a while now.

For a moment on Sunday, Dak Prescott appeared to have come back down to earth as he wasn’t the same player from the first couple weeks. Uncharacteristically, Prescott threw across his body as he hurled it deep into coverage. It was a poor decision, and something we haven’t been seeing from Dak thus far this season.

Prescott eventually got into his groove, and once again - he was outstanding in the second half of the game. He may be slow out of the gate, but once he gets warmed up, he’s virtually unstoppable. Prescott in the second half this season is 29/32 for 448 yards, three touchdowns, no interceptions, and a 150.0 passer rating.

The Cowboys decision to trade for Amari Cooper last year keeps looking better and better with each new game. On Sunday, Cooper caught six passes for 88 yards, including two touchdowns. He has four touchdowns on the year. The Cowboys young wide receiver has now played in a total of 14 games with the team and he’s compiled 82 catches for 1,134 yards and 11 touchdowns. You can call him whatever you want, but receivers with that type of production are usually called elite.

Cooper continues to show that he’s one of the most difficult covers in the league. He faced an All-Pro corner in Xavien Howard (who was ejected), yet still turned in a great performance. It’s so awesome to have no. 19 wearing the star.

I was fine watching a first-round pick get cut loose when the Cowboys released Taco Charlton earlier in the week. One could believably argue he had checked out mentally for a while now, so many fans weren't going to miss him.

But give Charlton credit, he went out there and played hard. Maybe the change of scenery will do him good. The Cowboys have protected Prescott extremely well this season as he’s on been sacked one time entering this game. It’s now two times, courtesy of Taco.

This is clearly a coverage sack, but love the relentless effort from Taco Charlton. That's never been an issue for the young pass rusher. Good for him. pic.twitter.com/KRuOMmSZ7T

9. Don’t give me this soft schedule silliness

Yes, the Cowboys haven’t played a tough team yet this year. Beating the Giants, Redskins, and now the Dolphins isn’t making anyone go out and get Super Bowl champs tattoos. There have been some grumblings about how the Cowboys are in for a rude awakening once they reach the difficult part of their schedule. Will they face tougher teams? Absolutely. Is that a cause for concern? Absolutely not.

Soft schedule up front - who cares. The Cowboys get better as the season progresses. It's the Jason Garrett way.

It’s always great to win on Sunday, but it’s even better when your biggest divisional threat loses. After a Sunday night loss to the Atlanta Falcons last week, the Philadelphia Eagles came up short in another nail biter as they fell at home to the Detroit Lions 27-24. The Eagles are now 1-2 with both of their losses being to NFC teams.

Losing happens, but it certainly has to bring out a cause for concern if you’re an Eagles fan. The team goes through these spurts where they don’t play very well, and that’s been on display for three straight weeks. And head coach Doug Pederson made some questionable late-game decisions as he chose to go for it deep in his own territory even though he had three timeouts and the two-minute warning to work with. There was also some terrible clock management down the stretch. Had that been Jason Garrett - he would’ve been roasted.

It’s early, but the team Philadelphia is putting on the field right now isn’t playoff-caliber. And the Eagles now have to travel to Green Bay to face a 3-0 Packers team. It’s entirely possible the Cowboys could have an early stranglehold on the division at this time next week.

What Do The Rays Have To Do To Make The Playoffs?

Several ABC affiliates cut away from the last minute of Pitt’s 35-34 win over No. 15 UCF for commercials and local news