Keanu Neal’s injury revealed a problem with this NFL rule 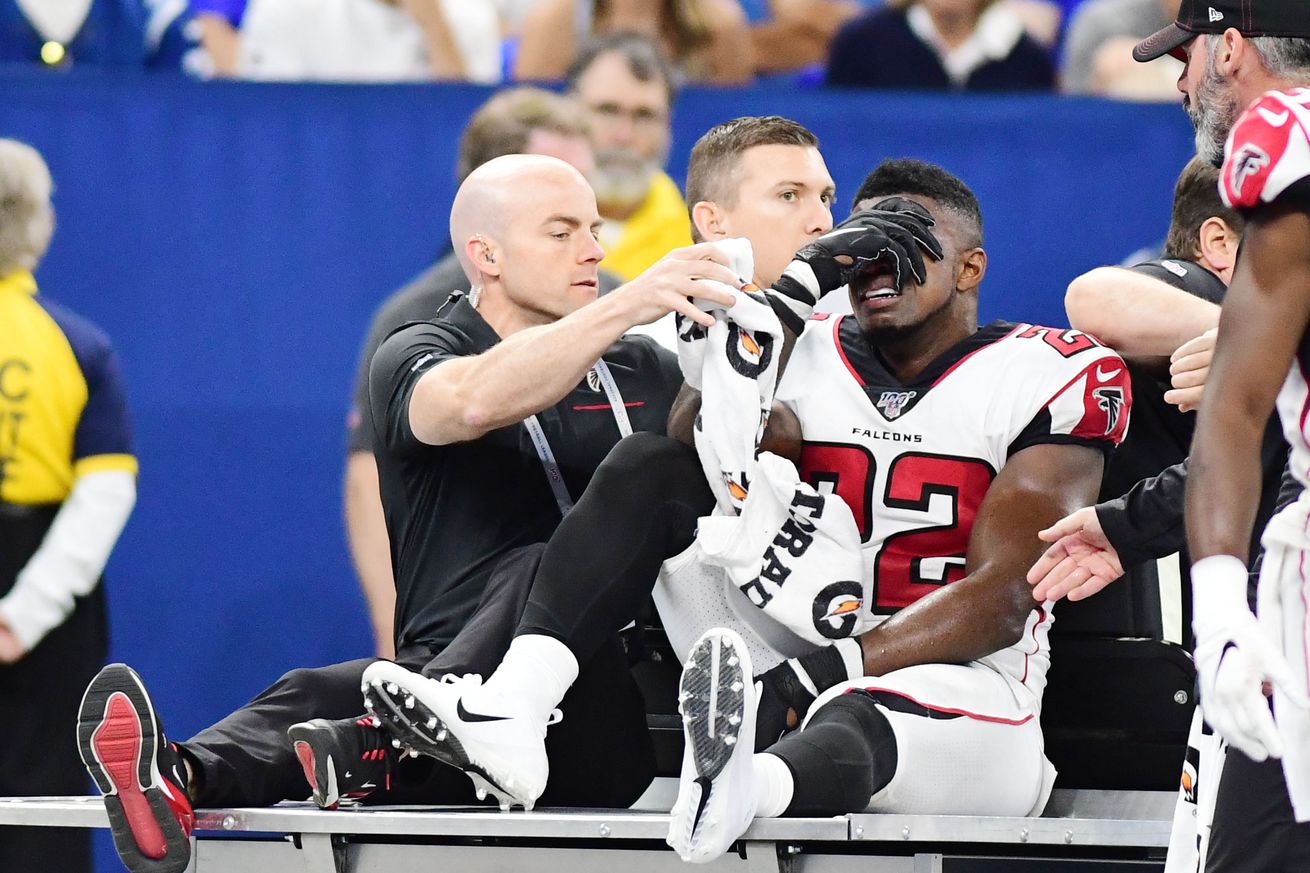 The NFL’s rule about wearing helmets on the field doesn’t need to be so black and white. Neal’s injury proved as much.

Atlanta Falcons safety Keanu Neal suffered a season-ending injury for the second consecutive year after tearing his left Achilles against the Colts Sunday night. Neal was flagged on the play because he took his helmet off while on the field, and well, that penalty stinks.

The penalty is unfortunate because of the circumstances. Neal was visibly in a lot of pain, and appeared to know immediately that his season was over. Taking off his helmet right then and there on the field was a harmless form of expressing himself, and self-care.

Keanu Neal gets incredibly emotional on the field after realizing he has an injury. Refs call an unsportsmanlike penalty on Neal for having thrown his helmet in frustration. pic.twitter.com/YtmoyzLReW

Last year, Neal tore his ACL in the Falcons’ first game of the season against the Eagles. The emotion we saw from him on Sunday was undoubtedly more than just that afternoon’s injury. It was also about the ACL, the hard work that went into coming back from that one, only to suffer another devastating injury.

For clarification, the 2019 NFL rulebook defines the penalty as such:

Removal of his helmet by a player in the field of play or the end zone during a celebration or demonstration, or during a confrontation with a game official or any other player.

Based on that, Neal shouldn’t be penalized. It would have been cool of the Colts to decline the penalty, because there was no missing the anguish that Neal was going through in front of everybody in the stadium. We’d also be talking about this more because it would be a rare showing of literally anybody in the NFL taking a second to be human (plus, everybody loves #sportsmanship). However, the Colts understandably accepted the penalty.

In Neal’s circumstance, this penalty doesn’t represent the spirit of the rule. He didn’t remove his helmet in celebration or a demonstration, and had zero confrontation with anybody except the unfortunate limits of the human body.

Had it not been for last year’s injury and this one, there’s a great chance he’d be a household name after the numbers he put up in his first two seasons. In 30 games, Neal had eight forced fumbles, and three fumble recoveries, 153 solo tackles, six of which came for a loss.

A lot of people view football and other sports as simply a game. But for professional athletes, it’s a craft, just like many other jobs or hobbies. Writing is my craft, and something that I am constantly trying to get better at. But my ability to do this is never going to be hindered by injury, because I’m not putting myself at risk (carpal tunnel is for rookies). I’m a guy with a laptop and a lot of time on my hands.

Football is brutal on the body — much more than most people realize. For as much as football has, and will hopefully still give to Neal, it can take just as much away. So for another low moment like this to arise, when he’s reached the very top of his craft, it’s frustrating to a level that most of us will never know. If Neal wanted to send his helmet into the rafters of Lucas Oil Stadium with that “2014 AFC Finalist” banner, he should have been able to without consequence.

The rule as it is written right now is fine, and was implemented in good faith. It’s meant as a safety measure for players, which is what the rule should be about. And in that point in time, referees made the call that they’re used to making.

However, I don’t think anybody on an opposing sideline would have made much noise about that particular flag being picked up after seeing the incredible pain Neal was in. Watching that unfold in real-time was shocking, and I can only imagine how much worse that had to have been for those that were on the field.

Don’t get me wrong — that doesn’t mean officials should be scolded for the call. This isn’t something that happens on a regular basis. And generally, being an official in professional sports is up there with the worst jobs to have on the planet, like being the President of the United States.

But hopefully the NFL learns from this, and insult won’t have to be added to injury again in the future. Because in the same way the NFL has softened up celebration penalties and is now allowing players to acknowledge their success, players should also be allowed to express their despair in those low moments like Neal did Sunday.

An ode to the three in what the Seahawks are chasing

Why Gardner Minshew is exactly what the Jaguars need