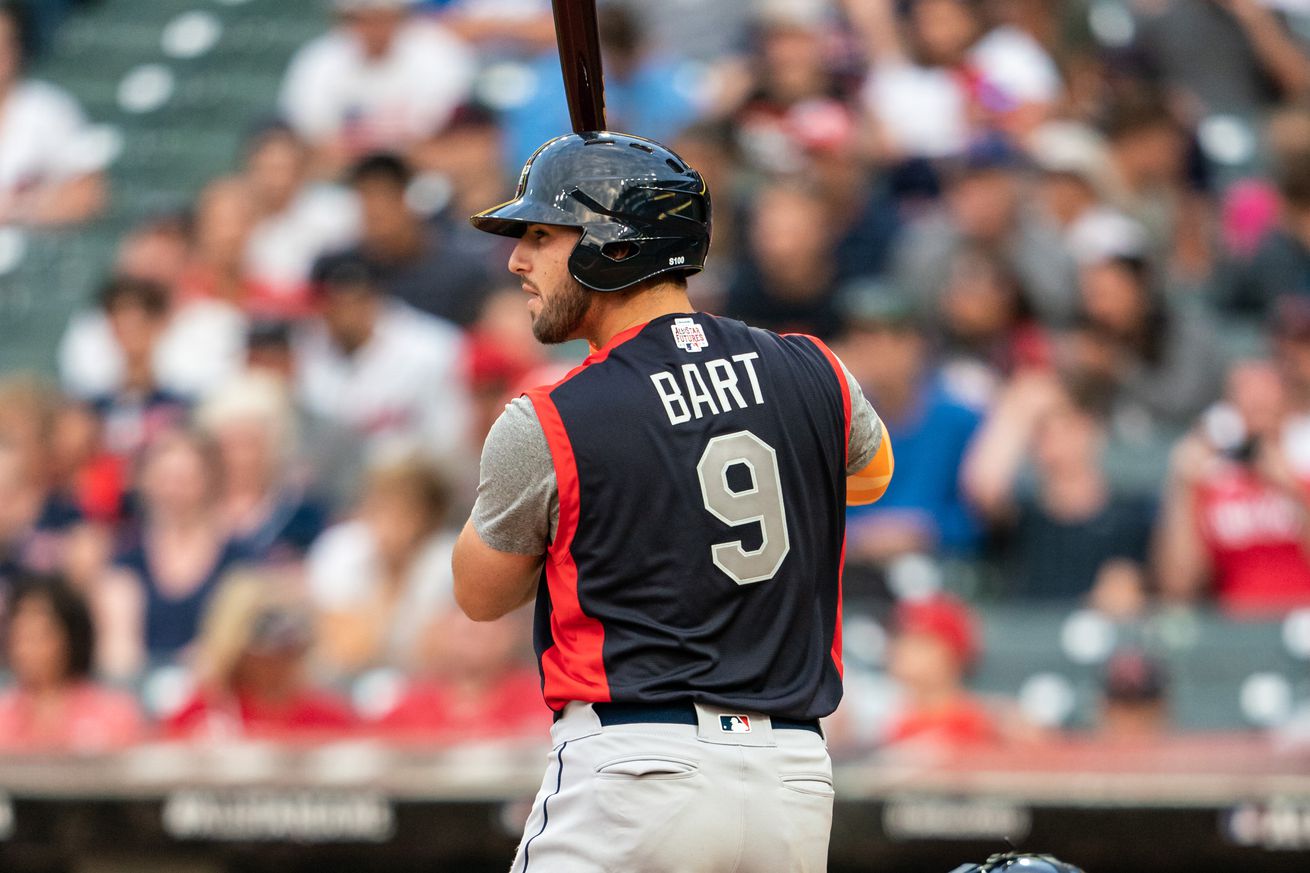 Baseball prospecting ain’t over just yet!

Joey Bart started the Fall with a bang!

Joey Bart is pretty good at baseball. The #SFGiants prospect gives Scottsdale an early lead with a two-run homer in his first at-bat of the @MLBazFallLeague. pic.twitter.com/tZKoTQzWEr

Well I guess that's a way to begin the Fall League! Joey Bart has now homered in 2 of his first 3 at bats tonight . Here is the 2nd one pic.twitter.com/obi8mpJZTk

Not a bad way to get things going!

But before we get to that — you, young reader, may be new to following the Arizona Fall League and need some background information to understand why this post is relevant, or even exists at all. And I am so here for you and your neophyte ways! (other more seasoned readers may skip down to the jump.

The Arizona Fall League is an offseason prospect showcase league that is owned and operated entirely by MLB. It was started way back in 1992 as a way to bring baseball’s best prospects together in one place (as opposed to dispersing to various winter leagues) where they could be scouted and appraised against the best of their peers. It has become one of the elite prospect gatherings in baseball, and also one of the most enjoyable experiences for fans who love following prospects, as you get great seats for extremely affordable prices and get to mix with the entire scouting industry, both inside MLB and out, as well as get some great interaction with the players themselves.

The league is made up of six teams, each of which receives a group of prospects from five MLB franchises. There’s a little jockeying around in order to make up a functioning roster, but the teams do tend to try to send their best near-ready prospects to the league and often look to make up some playing for players who lost portions of their season to injuries.

In 2001, the AFL began its own Hall of Fame and included in the very first inductee class was former Manager Dusty Baker, whose stint managing the Scottsdale Scorpions back in 1992 was his only managerial experience prior to accepting the Giants job that same winter (a lack of expertise which was somewhat controversial back in those quaint times). In 2018, Buster Posey was inducted — the first Giants player to receive the honor.

And how good is the talent on hand? Well, let’s let the league’s official website answer that question.

So there you go — 60% of the representatives become big leaguers. So don’t sleep on the “non-stars” — there’s something that the team is seeing in that player to deserve a berth.

And — since I get this question all the time — sadly there is no video stream of most AFL games other than the Rising Stars game and the Championship, both of which are televised on MLB Network. Sorry folks — however, if you follow a lot of the prospect media folk on twitter you will catch quite a few video highlights (as seen above!)

So with that, let’s see how the Giants’ contingent — which includes two of their top three prospects — did in this short, first week (as a bit of housekeeping, the AFL is dark for the first several Mondays this year so I’ll plan on a post every Tuesday morning).

Obviously, Bart was the standout to open the league. He homered twice in his first game and has been consistently taking strong at bats, as witnessed by the 3:0 walk to strikeout over his first three games. And he just seems to be barrelling up everything so far.

Joey Bart has now gone 2-3 with an RBI double pic.twitter.com/F0dGvh9r2o

And if that’s not enough for you, he can do this too.

Joey Bart has already shown he can hit in the ⁦@MLBazFallLeague⁩. The #SFGiants catcher can also throw. pic.twitter.com/zH8sdxfSlu

The Giants’ prospect Player of the Year Heliot Ramos isn’t off to quite such a strong start. Having just turned 20 a week earlier, he’s one of the youngest players in the league and might well be expected to struggle, just as he did after his promotion to AA (which is where plenty of AFL pitchers come from). Heliot may get abused by some of these guys but its all part of the learning process (just for historical reference: 19 year old Mike Trout’s AFL was memorably underwhelming for most scouts as his gas tank had hit E by that point). The tools to play are still there for Heliot.

Jacob Heyward has had an interesting run since his regular season ended — he was promoted to AAA for the PCL playoffs and became a Magic Wandoo RBI genius, knocking in two runs in each game of the PCL championship and the AAA National Championship game. He did all of that without an extra base hit, so it’s interesting to see him: 1) continue to have some success in the AFL; and 2) show off some XB power.

Jalen Miller got in just one game on Sunday night and struck out in all three plate appearances — rough go of it there for Jalen.

The pitching contingent is a little less tantalizing than the hitting group. Tristan Beck, who the Giants acquired from the Braves in return for Mark Melancon is the most notable of this group — and the only starter. Beck, a Stanford grad, has seen his status wax and wane a lot the last few years along with his velocity. Prior to the deal we’d heard a lot of 90ish reports on his fastball, but in his first start with San Jose it suddenly popped back up to mid-90s (trying to impress the new bosses?). There were inconsistencies thereafter and it’s anybody’s guess where he’ll ultimately settle in and whether starting or relieving is the path he ends up on.

The group of three relievers mostly come from the lower levels — both Tucker and Schimpf spent time in short season Salem-Keizer this year, along with time in Augusta. Rubio is the most advanced, having spent the bulk of the year in San Jose along with a short — and not too successful — stint in Richmond.

If you’re looking for intriguing angles that can help explain their inclusion in this year’s AFL (other than the Scorpions needed more relievers and these guys were judged to still have some mileage on their arms for the year), well here’s an interesting note on Schimpf.

Sam Selman is the only #SFGiants org pitcher (min. 20 IP) with a K rate in the 40s. Who's been overshadowed?

And as for Tucker, well he stands out as one of the very very few LHP in the lower levels of the system. How few you might ask?

As @jemunter pointed out interesting aspect of this roster is imbalance of pitchers: 1 LHP, 16 RHP. That tracks w rosters at lower levels. Domestic Short Season squads had just 6 LHP on rosters at end of season (just 1 in SK) vs 43 RHP. Def position of org weakness in low minors https://t.co/s0ayTTYgCr

Adding in Augusta — where Tucker ended the year — only increases the lefty list by four. Given Tucker’s strong K rates this year (33 Ks in 21 IP) he may well stand out as one of the very few live armed lefties in the org’s reliever pipeline below AA. Something to keep an eye on.

One other thing to keep an eye on in the AFL this year is the future of baseball technology:

#MLB is testing an automated ball-strike system (ABS), aka “robot umps,” in the @MLBazFallLeague.

Here, #dbacks prospect Geraldo Perdomo has words for the home plate umpire before directing his ire toward ... a robot.

Interesting! That’s it for now — check back next Tuesday when we have a full week of games to play with.

Can Eli Manning still be an NFL starting QB in 2020?

MGoPodcast 11.4: A Hat That Says Nothing

Can Utah’s New-Look Offense Lead The Pac-12 Back To The Playoff?