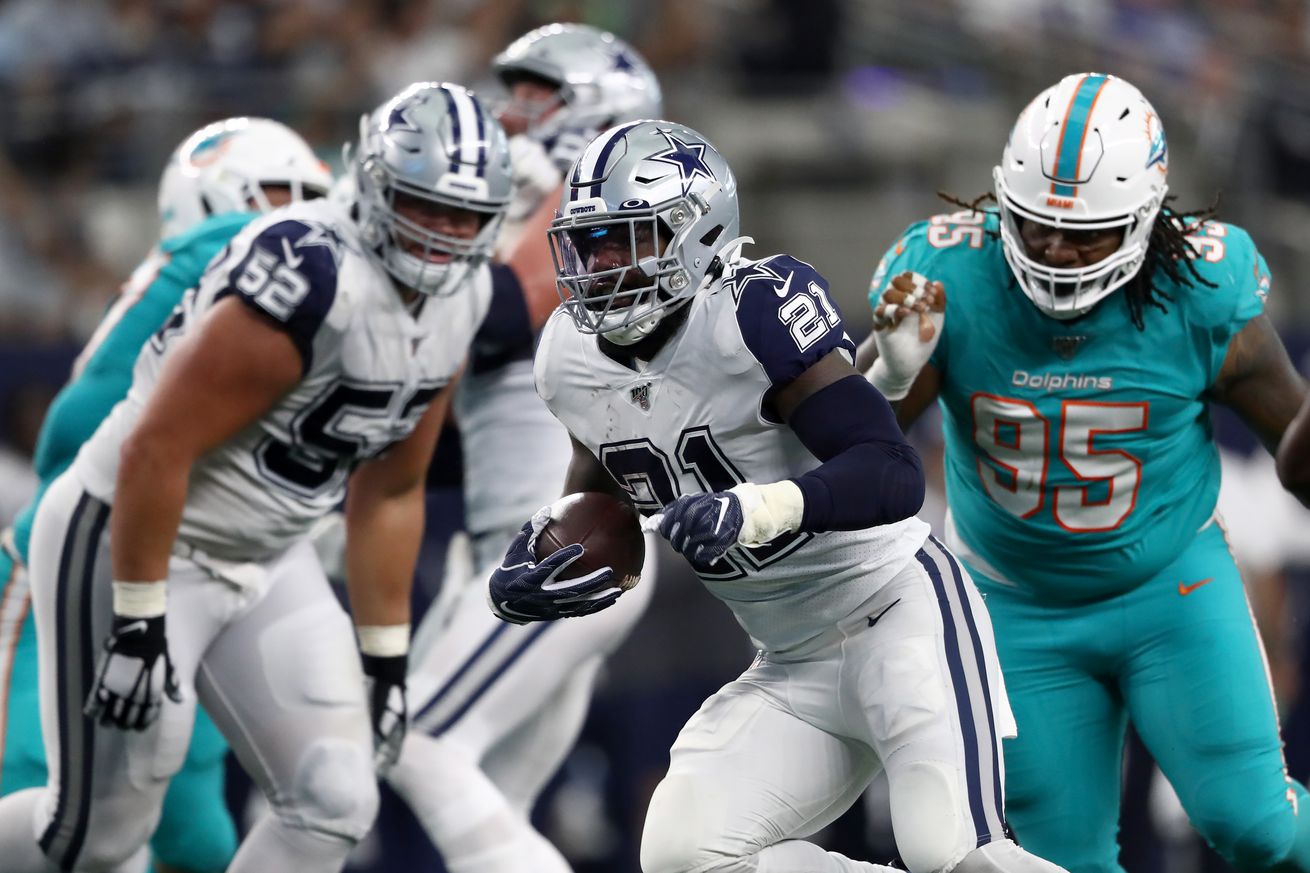 It was a tale of two halves for America’s Team.

The Cowboys came into Sunday’s game against the Dolphins as a 21.5 point favorite and after a slow and troubling start, it turned out to be a good day for those betting for them to cover. Dallas rode a dominant second half to a 31-6 victory to go 3-0 for the first time in Jason Garrett’s tenure as head coach. Here are five of the most impactful non-scoring plays from the game.

Near the end of the first quarter, the Dolphins had just scored a field goal to make it a 10-3 lead for Dallas, and it was evident that Miami’s offense had some juice with their new starting quarterback. In order to take advantage of that, head coach Brian Flores called a surprise onside kick on the ensuing kickoff.

The Dolphins actually managed to recover the ball but a flag was thrown for offsides. On the replay it looked close, but regardless it wiped out what would otherwise have been a huge momentum swing for Miami. Without the element of surprise, the Dolphins kicked it off normally on the second try.

Dak tries to do too much and throws a bad pick

On the drive that followed the onside kick attempt, the Cowboys were trying to get their offense in rhythm again and blow the game open with a 17-3 lead. On the third play of the drive, the first play of the second quarter, Dak took a shotgun snap and ran the play-action fake.

What was Dak Prescott thinking when he threw this ball?pic.twitter.com/kpwmyoPWbC

With some excellent blocking from his line, Ezekiel Elliott snuck out on a wide open wheel route, but Prescott was looking elsewhere. After rolling to his right, Dak took a shot downfield, trying to do his best Patrick Mahomes impression. But the ball sailed and safety Bobby McCain swooped in for the easy interception. The Dolphins went three and out, so luckily the turnover didn’t hurt them; however, it was a play that continued the first half trend of the Cowboys’ overall struggles with a poor team.

With just about thirty seconds remaining in the first half and trailing the Cowboys 10-6, the Dolphins were looking at first and goal with seven yards to go. A touchdown would give them the lead, and a field goal would make it a one-point game. Either outcome was good for Miami.

They handed it off to Kenyan Drake, who ran up the gut and got stopped pretty quickly. However, before he went down it was Jaylon Smith who managed to rip the ball out in a way that defies the laws of physics. It looks like he might have got some help from Drake bumping into his own man. DeMarcus Lawrence fell on the ball and took away any chance of the Dolphins getting a score before the half.

Coming out of halftime, the Cowboys offense needed to wake up. On the second play of the third quarter, Dak threw a strike to Randall Cobb that went for a 74-yard touchdown, but offsetting penalties resulted in a redo of the second and nine play.

DEVIN SMITH HIVE WHERE ARE YOU (via @thecheckdown) pic.twitter.com/jHxU7JcXai

So instead, Dak did this instead. Rolling out to his right as the play broke down, Prescott hit Smith, who did a good job of coming back to the ball. He hits a nasty spin to evade the tackle and cuts upfield for more, finishing the play with a 33-yard reception that moved the ball into Miami territory. Three plays later, Dak found Amari Cooper for a touchdown, and the beat down began.

In past years, it was a common complaint that the offense frequently had drives get blown up because of penalties, and that the unit couldn’t overcome the lost yards. While they’ve generally been good about that so far this year, that wasn’t the case halfway through the fourth quarter.

Already up 24-6 and primarily looking to run the clock out, Dallas ran a play on second and ten that resulted in a short incomplete pass. However, tight end Dalton Schultz got called for an unncessary roughness penalty that backed the Cowboys up to a third and 25 situation. Failing to convert after Zeke couldn’t corral a contested pass, Brett Maher bounced the 55-yard field goal try off the upright. If not for the penalty, it would have been a 40-yard field goal try at least. While it didn’t affect the actual outcome of the game, it did take points off the board and could be something worth keeping an eye on going forward.