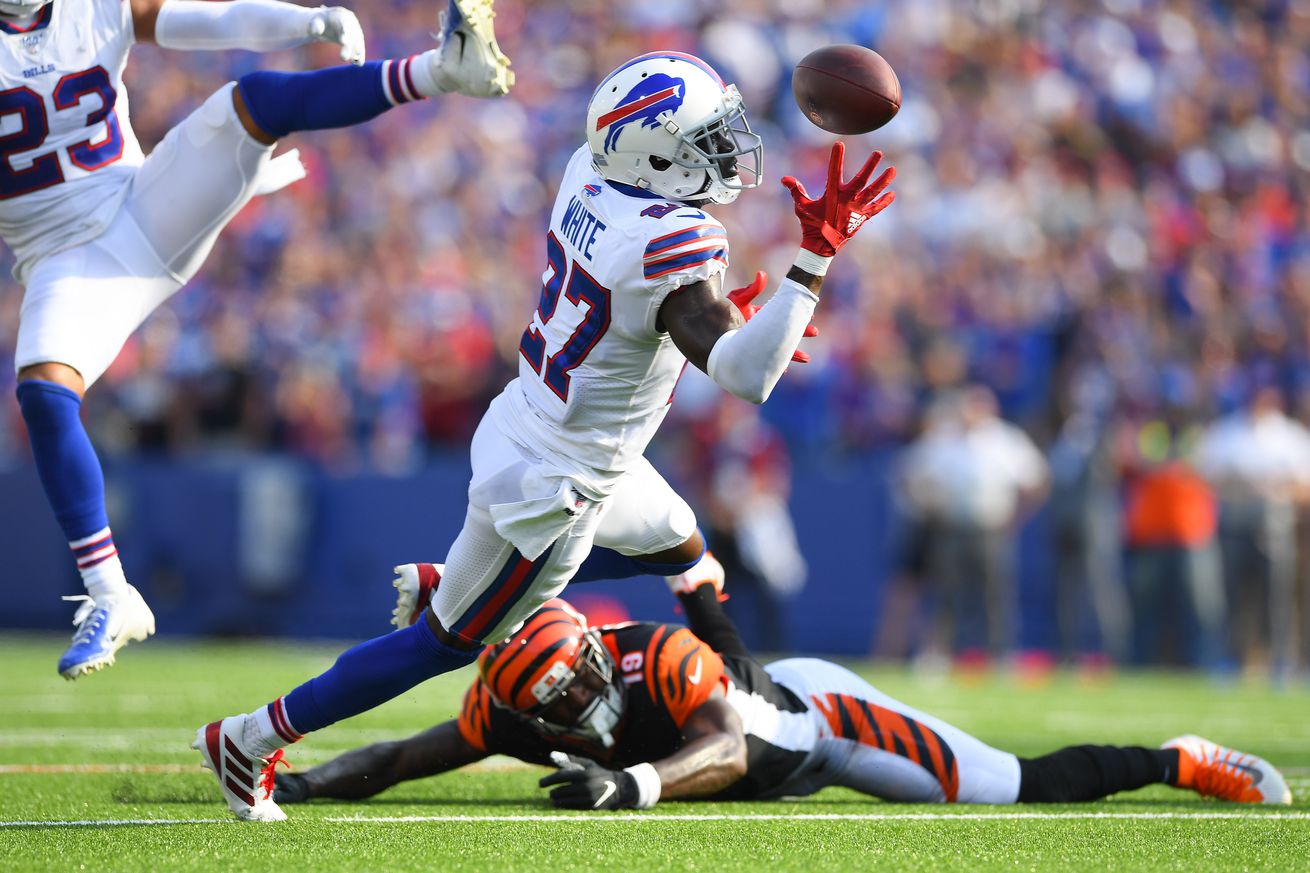 And that’s not entirely laughable.

The AFC East, typically, only has one winner. Here’s the scorecard for division championships for each franchise since 2003:

Since missing the postseason in Tom Brady’s second year as a starter, the Patriots have gone 79-21 against their division rivals in both the regular season and playoffs.The only year they failed to stand atop the AFC East came in 2008, when Brady missed all but one quarter of the season and New England still managed to win 11 games before ceding control of the division to the Dolphins via tiebreaker.

After starting the season on a 3-0 run that saw the Pats outscore opponents 106-17, it looks like 2019 could be another year of New England dominance in the East. The Dolphins are currently being dismantled and sold for parts like the totaled Honda Civic they are. The Jets are already on their third starting quarterback three weeks into the season.

But there’s one major obstacle left for the Patriots to clear en route to an 11th straight division championship; one they’ve cleared many times before. The Bills spent their offseason making upgrades to their roster and building a potentially dominant defense. At 3-0, they’re the only challenger remaining who can even make a run at New England’s crown.

The Bills are flawed, but they have the defense of a playoff team

Yes, yes. I know. Josh Allen. He’s got a career 55.6 completion rate and may not even be the best player named “Josh Allen” in the AFC. We’ll get to him.

But first, let’s start with the unit that makes Buffalo worthy of hope. The Bills’ defense has started the season by giving up fewer than 16 points per game, 300 yards of total offense per game, and a success rate of only 32.5 percent on third down — all top eight marks in the NFL. That unit is giving up just 4.8 yards per play, which is the sixth-stingiest rate in the league.

Those 2019 numbers came against the sinking wreckage of the Jets, Giants, and Bengals so they do come with caveats. Fortunately for the Bills, their 2018 legacy backs up the idea this team can contend. Last year’s squad ranked third in the NFL after giving up only 4.9 yards per play. Buffalo’s passing defense held opposing QBs to an 82.6 passer rating in 2018, which was also a top-three performance.

The nucleus of that mostly unheralded group returned for 2019 with a few important changes. Kyle Williams retired a Buffalo hero, ceding his spot as a middle-of-the-line wrecking ball to first-round pick Ed Oliver, who had four QB pressures in his first two NFL starts (no other interior lineman had more) and added another against the Bengals in Week 3. Linebacker Tremaine Edmunds saved an estimated 45 points in 15 games as a rookie last season and is on pace to do the same this fall. Tre’Davious White picked off Andy Dalton twice last week, has more interceptions than touchdowns allowed in coverage for his career, and has held opposing quarterbacks to a 59.4 rating when targeted.

That gives the Bills a young star at all three levels of the defense, and those budding standouts are surrounded by veteran talent. Micah Hyde has gone from undervalued and occasionally misused piece of the Packers secondary to versatile leader at safety. Star Lotulelei is the perfect space-eating complement to the more explosive Oliver in the middle of the team’s 4-3 lineup. Jerry Hughes and Lorenzo Alexander are the starting lineup’s elder statesmen, but remain useful pass rushers along the edges.

That’s an intimidating blend of talent, leadership, and playmaking from a team that allowed fewer yards per game than all but only NFL team in 2018. And all of those guys must keep it up in order to make things easier for one of the league’s least efficient passers.

Allen started off the season worse than any other quarterback in 2019. It took him all of two quarters to turn the ball over four times against a Jets team that forced only 20 turnovers the year prior.

He’s rewritten his narrative in the 10 quarters since. He rallied Buffalo from a 16-point deficit against New York, dusted the Giants in a 14-point win that dropped the curtain on the Eli Manning era, and then overcame a Bengals comeback effort at home. He had a role in five of his team’s eight touchdowns in that span, running for two and throwing for three more. His numbers, albeit in 150 minutes of game time against three teams that are currently a combined 1-8, show signs of life:

The most important number isn’t on the sheet, however. It’s two: the number of fourth quarter comebacks he’s delivered so far in 2019. Sure, Allen’s mistakes have played a role in his team losing those leads — his turnovers have resulted in 13 points, or nearly 28 percent of opponents’ scoring output so far — but Buffalo is beginning to trust its young leader late in games.

Even so, discounting a wretched half of football from a player who has given us plenty of them in a year-plus in the league is disingenuous. History is not kind to Allen’s prospects as a passer. His career at Wyoming led Banner Society’s Jason Kirk to write this headline about him after looking at his advanced stats profile:

Not great! But outliers exist in the football world of big analytics, as Daniel Jones’ serendipitous debut suggests. Allen was not a polished product coming out of the Mountain West and is not one now. Painting his future with the ink of his past may not tell us who he’s going to be.

Allen had his moments as a rookie — most notably dispatching the Dolphins in Week 17 with three touchdown passes — but struggled to provide even average production through the air. He completed just 52.8 percent of his passes, and while some of that can be blamed on a lackluster receiving corps, only 63.1 percent of his passes were deemed “on target” by Sports Information Systems, which was the lowest mark among NFL quarterbacks who threw at least 200 passes in 2018.

Allen had eight games as a rookie where he failed to crack a 72 on the passer rating scale — an especially concerning number when you consider he only played in 12. The Bills went 1-7 in those games, beating only a disheveled Titans team in a 13-12 rock fight made possible by an aforementioned smothering defense.

There is one mitigating factor that can help Allen succeed even if he never completes more than 60 percent of his passes or breaches a 2:1 TD:INT ratio. He’s a tremendous runner with great instincts when it comes to breaking out of a collapsing pocket and into daylight. Only one quarterback in the league has more rushing yards than the Bills’ sophomore since he entered the league: Ravens’ dual-threat weapon Lamar Jackson, who has 59 more carries than Allen. Allen leads the league’s QBs in both yards per rush (6.4) and rushing touchdowns (10) since 2018.

General manager Brandon Beane made it a point to follow the Jared Goff blueprint and surround his quarterback with as much skill player talent he could lure to Buffalo. In came ballhawk targets like Cole Beasley, John Brown, Andre Roberts, and Tyler Kroft to run down Allen’s off-target heaves. Linemen like Spencer Long, Mitch Morse, Ty Nsekhe, Jon Feliciano, Quinton Spain, LaAdrian Waddle, and second-round pick Cody Ford were added to the offensive line in hopes of keeping Allen upright and healthy.

That’s resulted in early-season improvements for the second-year passer. Allen’s interception and sack rates are down, and his yards per pass number has risen from 6.5 to 7.3. While that’s good, those gains came against three underwhelming opponents. Buffalo can compete if it’s the team that outscored opponents 59-24 over eight quarters ranging from the back end of Week 1 to the start of Week 3. It absolutely cannot if Allen remains the player capable of turning the ball over four times in one half, or the one who implodes after Ford gets beat inside:

Ford (at RG) was toasted by Atkins on the Allen interception. Was the root cause for Allen bailing from the pocket. But it doesn't excuse the decision. pic.twitter.com/4GnHhnqUJ7

We’ll see just how much of a scare the Bills can put in Bill Belichick’s heart when they meet the Patriots for the first time this season in Week 4. After carving up northern New Jersey for six out of eight quarters and then nearly losing to the winless Bengals, Buffalo will test itself against a prolific passing offense and a defense that allowed only three points in its first three games (and 14 more on special teams and offense). Allen, thrower of 15 interceptions in his first 14 NFL starts, will stare down a secondary that created six picks through three weeks.

A soft schedule and dominant defense has helped clear the runway for the Bills to be one of the last eight undefeated teams in the league. Buffalo has beaten the teams its supposed to early in 2019, which hasn’t always been something you can say about the club. After the Patriots they’ll face teams like Miami, Washington, and Tennessee before Week 10. Only three teams on the team’s schedule have winning records through three weeks (the Cowboys, Ravens, and Pats).

There’s a lot of opportunity to create a postseason run — and Week 4’s game against New England may wind up being a blip on the radar compared to the importance of the Week 16 rematch.

Sunday’s game still matters, though. It’s the barometer that shows the NFL just how scary the Buffalo defense is and just how much better Allen may have gotten. If the Bills want to be taken seriously, they’ll have to show out against the Patriots. They can establish themselves as contenders even in defeat, but not if Allen has another 20-for-41, two-interception day like he did the last time he saw New England.

A loss in Orchard Park may derail the Bills’ division title hopes. On the other hand, a win could establish them as this year’s version of the 2018 Bears — a team that can ride a dominant defense and an improving second-year passer to the playoffs.

Comedy in the ’90s, Part 4: ‘American Pie,’ the Raunchy Culmination of a Decade of Family-Friendly Films